Our distillery team has been busy, busy with a new partnership with our old friends at Sony Music’s Legacy Recordings! Introducing Sonic Archeology, a prohibition-inspired cocktail celebrating the PBS American Epic documentary series and its archiving of the historical genesis of American music!

The American Epic historical documentaries are a journey back in time to the "Big Bang" of modern popular music, inspiring our distillery to craft this original, bottled beverage.

Sonic Archelogy is a cocktail artifact, blending distinct Dogfish Head Distilling Co. spirits of whiskey, rum and apple brandy, with real lime and pomegranate juices to create a totally original drinking experience that is best enjoyed over ice. Are you drooling yet?

A cocktail derived from diverse musical influences mingled together during the Roaring Twenties and chronicled in the series American Epic, this warm, citrus-tart cocktail is the perfect summertime hand-bottled beverage. 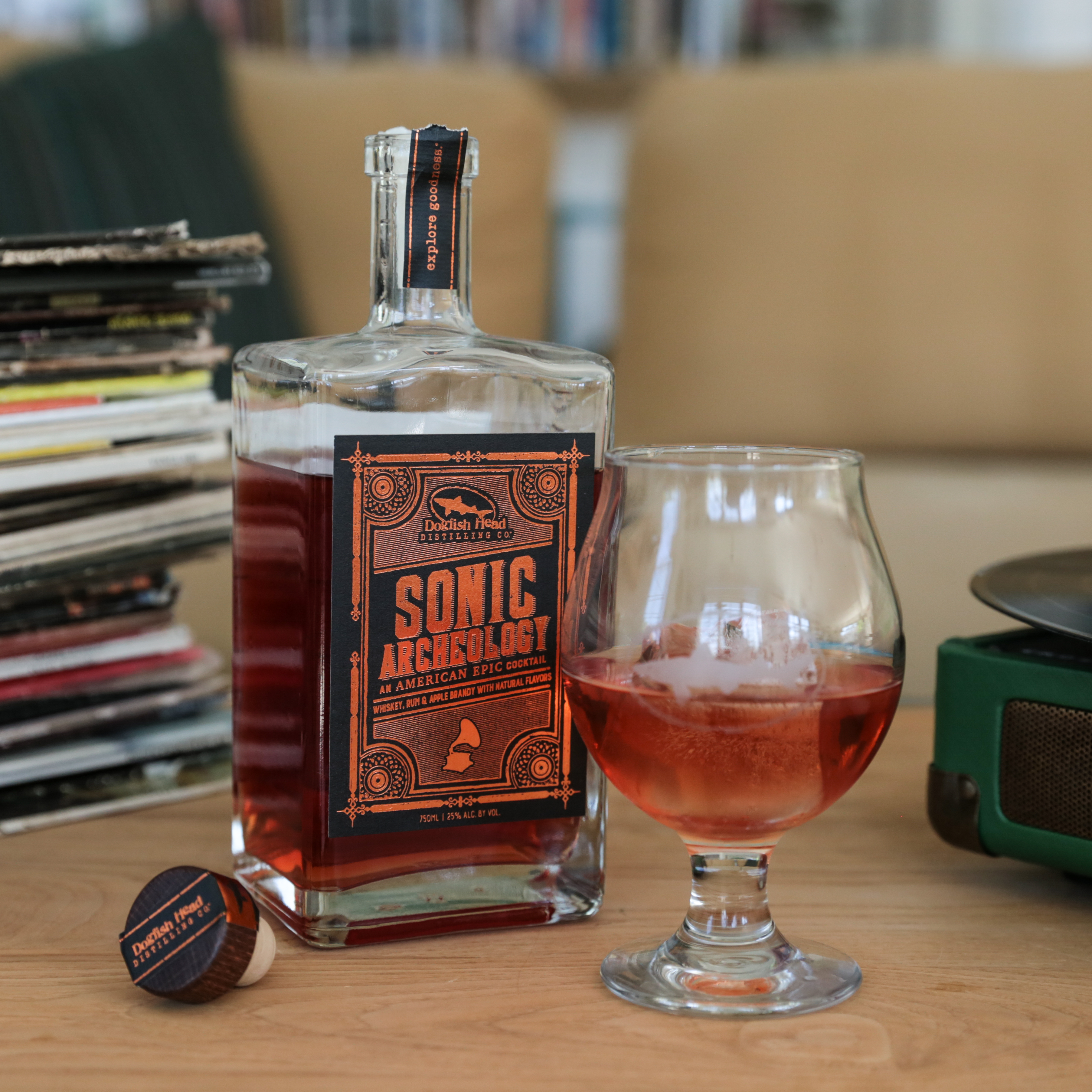 “Music has been a part of Dogfish since we opened our doors in 1995 as the smallest craft brewery in America,” says our very own Sam Calagione. “I was inspired by the American Epic story and how the sounds I listened to while home brewing were influenced by 1920s musical innovators during a time of alcohol censorship leading to underground prohibition style cocktails.”

American Epic, a four-part documentary directed by Bernard MacMahon, explores the pivotal recording journey at the height of the Roaring Twenties, when music scouts armed with cutting-edge recording technology captured the breadth of American music and discovered the artists that would shape our world. In the 1920s, as radio took over the pop music business, record companies were forced to leave their studios in major cities in search of new styles and markets. Ranging the mountains, prairies, rural villages, and urban ghettos of America, they discovered a wealth of unexpected talent. The recordings they made of all the ethnic groups of America democratized the nation and gave a voice to everyone. The series showcases an all-star roster of contemporary artists, led by Jack White, T Bone Burnett and Robert Redford, and tells the history of the remarkable lives of seminal musicians revealed through film footage, photographs, and exclusive interviews with music pioneers, their families and eyewitnesses to the era. The series was written and produced by Allison McGourty, Duke Erikson and Bernard MacMahon.

Legacy Recordings, the catalog division of Sony Music Entertainment, recently released American Epic: The Collection, a 5-CD/100 song deluxe box set, and American Epic: The Soundtrack, a single disc anthology of 15 songs featured in the American Epic three-part historical documentary (1LP or 1CD). This series of music releases associated with the film series American Epic led the way for the U.S. premiere on PBS on Tuesday, May 16, with the next film on Tuesday, May 23 and final on Tuesday, May 30 at 9 p.m. (check local listings). On June 9, Columbia Records will release American Epic: The Sessions, the soundtrack to “The American Epic Sessions” directed by Bernard MacMahon. In The Sessions, premiering June 6 in the U.S., the team has reassembled the very first electrical sound recording system from the 1920s and invited twenty of today’s greatest artists including Jack White, Elton John, Willie Nelson and Beck to have the chance to pass through the portal that brought the world into the modern era. Vinyl to be released by Third Man Records.