An hour a day keeps the butter and bananas away

Dogfish sensory panel always on the hunt for off-flavors

It's 10:45 on a Friday morning. Time for Angela Boone's first beer.

The Dogfish accountant's day is just beginning, and there's a pile of monthly reports to plow through, but this daily ritual is just as important to the brewery as keeping the books.

Angela slips into a narrow room on the first floor. It's like a confessional with four cubicles. She takes a seat and flips on a light switch. A few seconds later, a small door swings open in front of her. 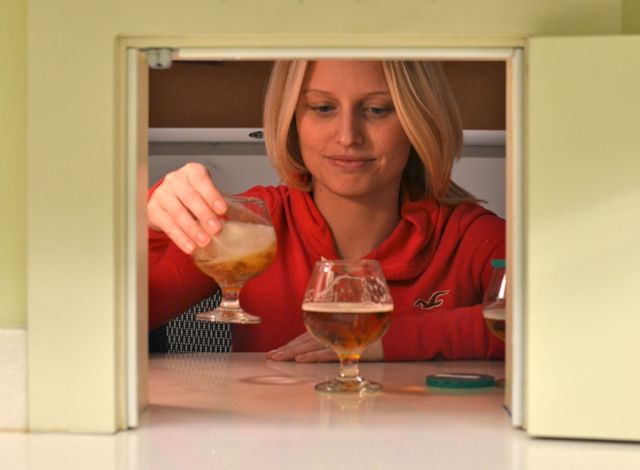 Dogfish controller Angela Boone takes a break from the books to sample a few beers.

That's Ryan Mazur, Dogfish's quality assurance supervisor. From 10:30 to 11:30 a.m. every weekday, our quality team runs an in-house sensory panel that decides whether each batch of beer Dogfish brews is fit for shelves and taps.

Ryan, who slings words with the speed of an auctioneer, starts sliding snifters through the door.

"We'll start with two 60 Minute fermenter samples crashed and dry-hopped. Sample three is 75 Minute. We didn't put maple syrup in it yet. Just base it on 60 and 90 Minute coming together and look for things that don't belong. The last two are finished 60s, OK?"

She holds one of the beers up to the light then puts her hand over the top of the glass. She swirls, smells and swirls again. Finally, she sips.

Any notes of butter or bananas? Wet basement or pennies? Does the beer taste leathery or stale, oily or rancid? She notes her impressions, and to make life easier, Ryan has trained all of the panelists to speak the same sensory language. Buttery notes are called diacetyl, banana is isoamyl acetate, wet basement is musty, and pennies are metallic.

"There's 32 different off flavors," says Ryan. "If we're all speaking different languages, it's hard to tell what's going on."

Angela methodically moves through the first three samples and doesn't detect anything wrong. She marks them "TTT," or true to type, and continues on.

Something about those other two samples gives her pause, though.

"Angela could find missing children with her nose," says a fellow panelist. "She's a bloodhound."

'We taste beer all day'

But Angela wasn't always a supertaster.

"I always drank really light beer," she says. "I was really scared to go into sensory because I thought I was going to be terrible."

So, how does someone who only drank light beer get to be the bloodhound of the brewery?

"Training and repetition," says Ryan. "They spend 40 hours taking a class, and we talk about beer all day, we taste beer all day. I'll spike a sample, and as they're tasting it, I'll repeat myself over and over again: diacetyl, diacetyl, diacetyl. I'll say it like 50 times per sample to establish a memory-mapping procedure."

Ryan teaches the sensory class about twice a year. Dogfish brewers, cellarmen and packaging leads are required to take it, but it's open to all co-workers. Right now, Ryan has about three dozen trained panelists, with every department represented.

"Just because you're a brewer doesn't make you a better taster," he says. "I don't care where you work in this company, it's no reflection on how good you are at tasting beer." 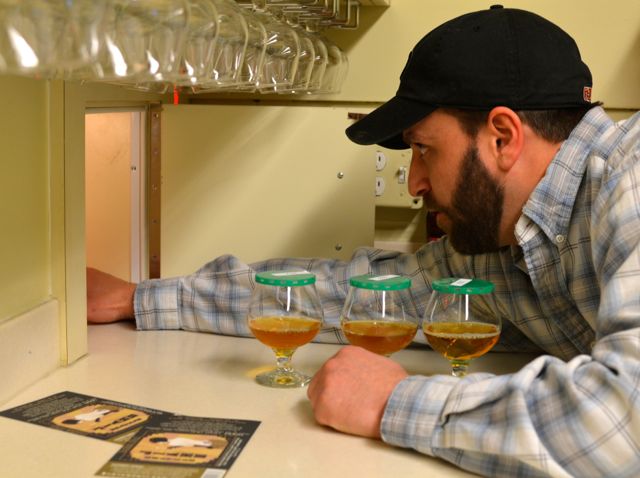 Ryan has one of those jobs that beer lovers dream of, but it's been an evolution for him, as well. He got his foot in the door at Dogfish in August 2005 as a forklift driver. A few months later, as the quality department was taking shape, word got out that he had a biology degree. He soon found himself in the lab.

"It was essentially a closet with a microscope in it," he says. "And it evolved from that."

Ryan first headed to the Siebel Institute in Chicago to study beer production and quality control, then he took a course with FlavorActiV, the world's largest sensory trainer. That's where he discovered the warehouse-release program we now use at Dogfish. If a beer gets through sensory panel, it's clear for packaging.

Dogfish's program isn't cheap. Each panelist costs thousands to train, and for statistical relevance, we need a lot of them. It's pricey, but prevents even pricier problems, and there really aren't many alternatives.

As Angela tastes the last two samples of the morning, she picks up some notes that shouldn't be there. They're both 60 Minute IPA, but the first has a hint of vanilla and the other is overwhelmingly musty. The vanilla is actually kind of nice, but neither flavor is true to type. She fails both.

"You can't look at it as bad or good or pleasant or gross," says Ryan. "You have to look at whether it's right or wrong."

A thumbs down from sensory is costly and raises a lot of questions. What went wrong? How did it happen? At what stage? Can it be avoided down the road?

If the sensory panel notes something, it'll stop the presses. That's how important it is.

Fortunately, these off samples of 60 Minute aren't signs of bigger problems. Ryan was just keeping the tasters on their toes.

"I spiked those two samples," he says. "I like to change it up, keep it fresh. It's Friday. I'm having a little fun."