In a perfect world, we'd package a batch of beer one day, and the next day it would appear on taps and shelves in all 44 states where our off-centered ales are sold. But if you've ever hunted for a highly sought-after beer from Dogfish Head or any other small, independent brewery, you know we don't live in that perfect world. If you come to our Milton Tasting Room & Kitchen or Rehoboth Beach brewpub, you'll find a slew of off-centered ales on our taps and shelves. Easy-peasy.

The rest of our distribution footprint? Well, that's a little trickier. 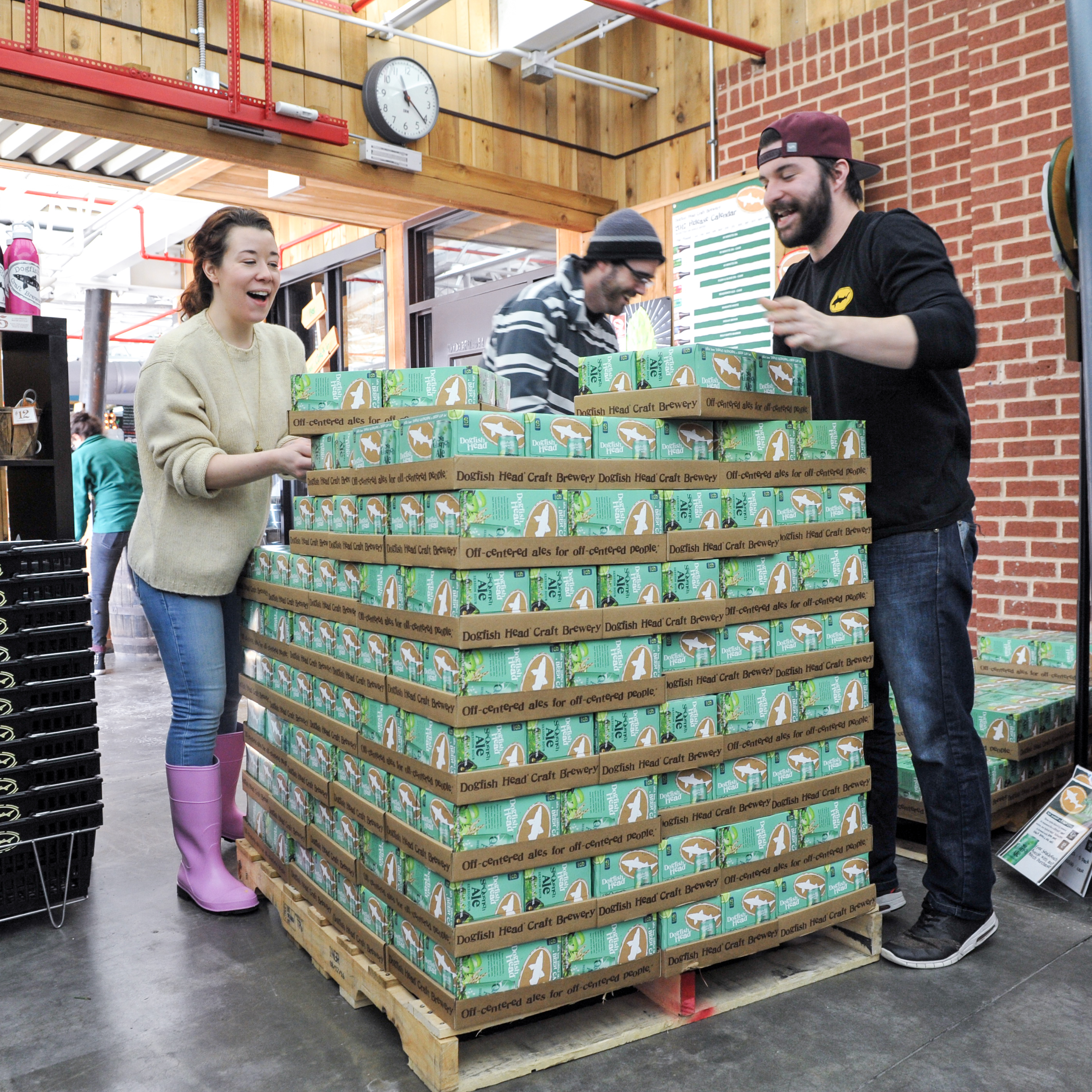 As odd as this might sound, you – the beer drinker – aren't always our direct customer. Don't get us wrong, we love you and need you and want you, but by the time our beer gets to your glass, it's switched hands a few times.

It's a long story, but here's the rub: after the repeal of Prohibition, the states set up a three-tiered distribution system of producers, distributors and retailers. The three- tier system does a lot of things – protects consumers from unlicensed products, helps smaller producers get on shelves, regulates tax collection and prevents corruption – but it also means producers like Dogfish don't have much control over their product once it leaves the loading dock. We don't get to say where our beer goes, when it goes, or how much it's sold for once it's there.

By far and large, our direct customers are that second tier, the distributors, and we work with more than 100 across the country. And just like each of the more than 7,000 American craft breweries have their own way of doing things, their own philosophies and their own idiosyncracies, so too do all of those wholesalers.

“I saw you released a new beer at your Delaware locations over a week ago ... why haven't I seen it in my neck of the woods yet?!”

It typically takes anywhere from two to three weeks for a beer to hit the market. Remember ... once it leaves the brewery, it has a few stops to make along the way. First it has to make it from our warehouse to the wholesaler's warehouse. From there, wholesalers then distribute to retailers – bars, restaurants, package stores, etc. –  in your area.

“My favorite store doesn't have the beer I'm looking for, but the gas station
on the other side of town does. What gives?”

When the demand for a beer is out in front of supply, the wholesalers have to decide who they'll sell the beer to and who they won't. It's called allocation, and it all comes down to the relationships between wholesalers and retailers. We're out of the picture on that one.

To meet demand, we brew and pack seven days a week - often round the clock - but in the grand scheme of things, we still only brew 1/10 of 1 percent of all the beer sold in the U.S. We're growing, but we're focused on growing at a strong, steady pace that allows us to stay true to ourselves. If we only had one or two beers in the market, we could brew way more of each - but we package and distribute dozens of beers each and every year. After all, variety is the spice of life.

“I found the beer I was looking for, but it's too expensive!”

We strive to make world-class beer. To do that, you need world-class ingredients and a world-class team of co-workers. We don't take shortcuts, we don't dumb-down our beers, and we don't discount to clear the shelves.

That said, things occasionally get out of control at the retail level, especially with some of our most extreme beers like 120 Minute IPA and World Wide Stout. It's called price-gouging, and it stinks, but it's not illegal. Although we can’t tell retailers what to charge, we do reach out and let them know their customers think they’re being a bit over-zealous.

Our Fish Finder app is your friend. The Fish Finder can give you a snapshot of where you can find your favorite Dogfish Head beers. Just punch in your ZIP code, and voila, we'll tell you where your favorite beer has been delivered in the past 60 days. You can search for a specific beer, by store or by bar, and narrow it down from 100 to 5 miles away. Not all of our wholesalers report their data to the app and our Fish Finder doesn't report in real-time, but it's a good place to start. And just to be sure, it's always smart to call ahead before you make a trip.

If you have a question or request for a distributor, feel free to drop them a line. They are usually more than happy to accommodate customers. Here’s a list of our wholesalers.

Phew! That was a lot. Thanks for understanding the wild web that is beer distribution. We don’t know about you, but we need a beer. Let’s head on over to the Fish Finder to see what’s out there!