Folks from coast-to-coast are in for an “ooooh-so” tasty treat! Our new hazy IPA, Hazy-O!, is NOW available on shelves and taps nationwide. An ooooh-so-juicy hazy IPA, Hazy-O! is brewed with four types of oats – malted oats, rolled oats, naked oats and oat milk – for a hop-forward beer that is smooth and refreshing. Hazy-O! begins with (literally) truckloads of oats and wheat to create a sumptuous, full-bodied base. Then, it is liberally dry-hopped with hop varieties that deliver an abundance of tropical notes, including citrus, mango and pineapple. Available in 6 packs of 12 oz cans, beer lovers can track down a case of Hazy-O! using our Fish Finder!

“While Hazy-O! features a bunch of high-quality culinary ingredients, it’s the oats that are really the star of the show,” says Dogfish Head founder & brewer Sam Calagione. “Each of the oat formats used in Hazy-O! provides a unique characteristic to the beer. The malted oats offer a delicate malty sweetness; the rolled oats contribute a dense haze; the naked oats provide a subtle toasty, caramel character; and the piece de resistance, oat milk, creates a silky soft mouthfeel that makes Hazy-O! drink like a 5% ABV session sipper, instead of the 7.1% ABV powerhouse that it is. This foundation-of-four oat formats creates a target, allowing the beer’s bright and juicy hops to hit the flavorful bullseye.”

Born from a series of off-centered experiments, Hazy-O! highlights the magic found at the intersection of two unique, but unexpectedly complementary trends – the simultaneous, explosive growth of hazy IPAs and plant-based milks. “Oat milk is really having a zeitgeist moment, especially in the active lifestyle community” says Sam. “At Dogfish, we are proponents of leading active lifestyles that include both exercise and indulgence, and we are committed to crafting beers that fit that worldview. With Hazy-O!, we were able to create a true hazy IPA that can appeal to many different audiences – craft beer geeks, wellness-conscience consumers AND drinkers seeking both lactose-free and vegan options. Thank you, oat milk!”

The first-ever nationally distributed oat milk-centric IPA, Hazy-O! took almost a year of R&D to perfect. In fact, to ensure they harnessed all the goodness of oat milk in Hazy-O!, Dogfish Head enlisted the help of oat milk scientists from Elmhurst 1925, a family-owned, plant-based milk producer out of New York. Using Elmhurst’s culinary prowess and its Unsweetened Milked Oats, made with only three simple ingredients – oats, water and a bit of salt. 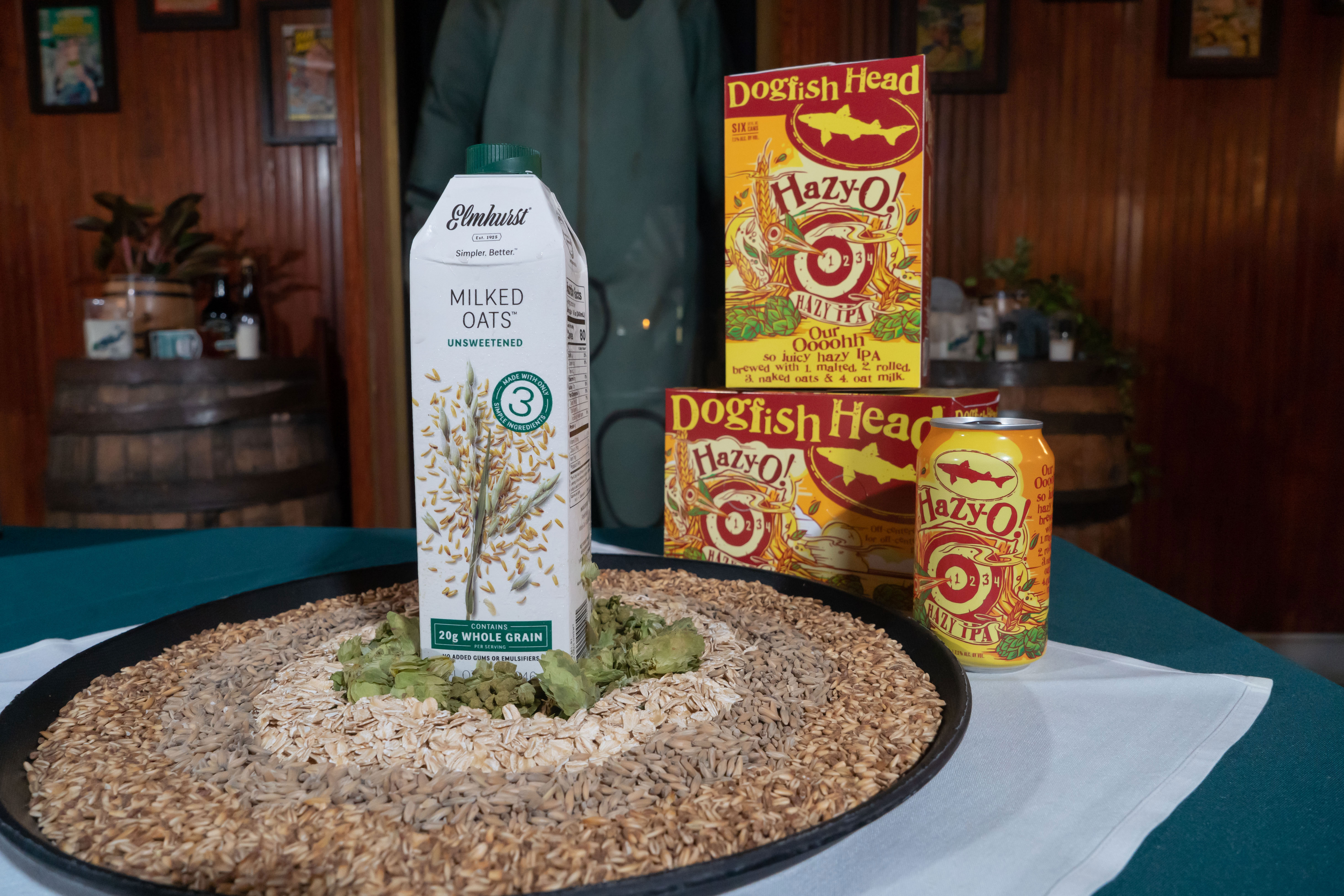 “When we heard the team at Dogfish Head wanted to launch an oat milk IPA, we jumped at the chance to partner with them,” said Heba Mahmoud, VP of Marketing at Elmhurst 1925. “Surprisingly enough, there was a natural synergy between the two brands. We’re all about using clean ingredients and maximizing the nutritional value and taste profile of plant-based offerings. We’re thrilled to help bring this new beverage to those seeking options they don’t have to question when it comes to ingredients and taste. We can’t wait to be a part of special moments among friends and families as they sip and create lasting memories.”

To further convey the distinction of the palate-pleasing liquid within, Hazy-O!’s maroon and gold cans feature intricate and storyful artwork with hand-drawn hops and wheat, the “hazy-o” sun setting over the water and a four-ringed bullseye to represent the four oat varieties used in the brewing process.

It's been a labor of love to bring this one to life, but one sip and you'll find yourself saying ... "ooohhhh that's good!"