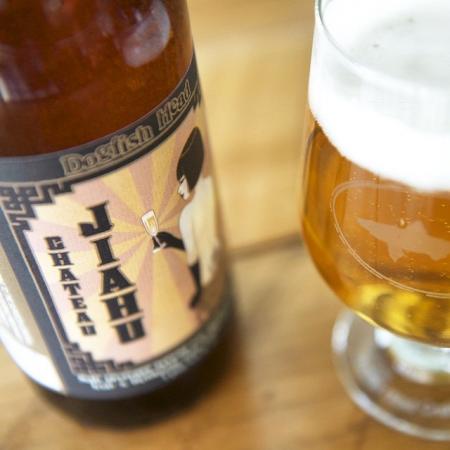 Let's travel back in time again for another Dogfish Head Ancient Ale (Midas Touch was our first foray and Theobroma our most recent). Our destination is 9,000 years ago, in Northern China! Preserved pottery jars found in the Neolithic villiage of Jiahu, in Henan province, have revealed that a mixed fermented beverage of rice, honey and fruit was being produced that long ago, right around the same time that barley beer and grape wine were beginning to be made in the Middle East!

Fast forward to 2005. Molecular archaeologist Dr. Patrick McGovern of the University of Pennsylvania Museum of Archaeology and Anthropology calls on Dogfish Head to re-create another ancient beverage, and Chateau Jiahu is born.

In keeping with historic evidence, Dogfish brewers use orange blossom honey, muscat grape juice, barley malt and hawthorn fruit. The wort is fermented for about a month with sake yeast until the beer is ready for packaging.

Did you catch the story on NPR's "All Things Considered" about Chateau Jiahu and our Ancient Ales? If you missed the story, here it is!