Ready, set … we’re sprinting into the New Year as THE exclusive sponsor of Tudor Games’ Electric Football World Championships. Yep … Electric. Football. World. Championships. Taking place Saturday, Feb. 4 and Sunday, Feb. 5 at our Tasting Room & Kitchen, passionate and elite coaches from across the country will descend upon Milton, Del. to battle for the optimum prize … a Dogfish Head swag package, a Tudor Ultimate (48 inches by 24 inches) Electric Football Game and of course, a year’s worth of bragging rights. Who will take home this year’s title?!

Kickoff happens each day at 8 a.m., sharp! Spectators are encouraged to don their teams’ colors and cheer on their favorite players in-person. Those unable to make the trek to tailgate in coastal Delaware can tune-in to a live stream broadcast of the event’s most anticipated moments via our YouTube channel. That’s right! During the only weekend of the football season with no live games, fans can get their fix with the Dogfish Head and Tudor Games Electric Football World Championships.

Want to get in on the action? Teams are set for this year but join the Electric Football Nation and start training for next year’s World Championships tournament. 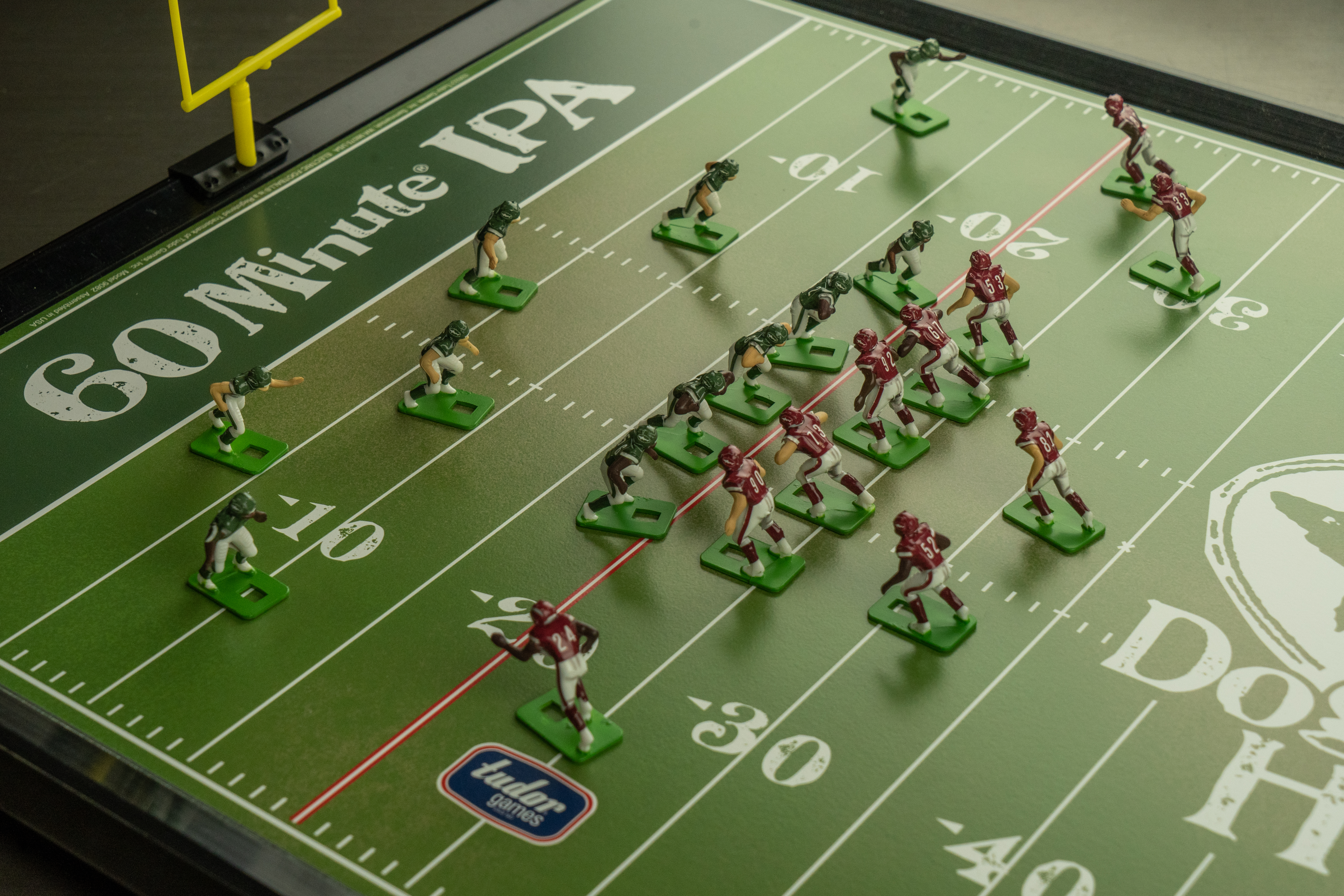 “The epitome of off-centeredness, this partnership is very close to my heart,” says Dogfish Head founder and brewer Sam Calagione. “Back when I first started brewing, I used a Tudor Electric Football game to MacGyver the first-ever continual hopping machine. That machine birthed one of Dogfish Head’s most well-known beers, 90 Minute Imperial IPA, and it now sits in the permanent collections of the Smithsonian Museum.”

Our original continual hopping device was built from a pickle bucket, an Electric Football game from Tudor Games and a boatload of hop pellets. Picture this … Sam drilling holes around the base of a pickle bucket and duct taping it to an Electric Football game. Then rigging the game at a 45-degree angle above the beer’s boil kettle. After adding hop pellets to the pickle bucket, Sam turned on the game and its vibrations allowed the hop pellets to shimmy-shake their way through the holes in the pickle bucket, down the field and into the boiling beer for a touchdown. By adding small, consistent increments of hops throughout the entirety of its boil, Sam was able to create a pungently hoppy that wasn’t (and still isn’t!) crushingly bitter.

“Just like brewing, the art of Electric Football requires time, practice and technique to perfect,” said President of Tudor Games, Doug Strohm. “Many people think Electric Football is random and uncontrollable, but we know better. Through our partnership with Dogfish, we can introduce more people to the fun of coaching, collection and customizing Electric Football and expanding our great gaming community.”

To celebrate the Electric Football World Championships coming to coastal Delaware, we’re hosting a weekend full of football festivities, including a plethora of exclusive beer releases at our Milton Tasting Room & Kitchen and Rehoboth Beach brewpub. Click HERE for more on the weekend’s events!