It's The End of the Wort As We Know It

It’s the age old question, “If you were castaway on a remote desert island and allowed to bring only one beer to enjoy in blissful solitude, what beer would and should you bring?” Well, thanks to Sam and a team of our co-workers, we’ve got your answer!

According to independent, third party lab data, we discovered that It’s The End of the Wort As We Know It contains more than 8 times the amount of Vitamin B Complex than one of America’s best-selling light lagers, including over 90% of the daily recommended serving of folic acid. “Myself and six other co-workers from various departments at Dogfish set out to brew the most survivalist-oriented beer Dogfish has ever made and packed it with a bunch of delicious culinary ingredients resulting in a ton of goodness in the form of essential vitamins and amino acids," says Dogfish founder and CEO Sam Calagione. “We’re also pretty pumped that a super-unique, nutrient-rich ‘survivor’ beer was born out of a brew day amongst friends originating from one of my favorite conversation starter questions, ‘What’s your desert island beer?’”

To concoct this off-centered brew, Sam and the crew blended an intensely fruity mixture of blueberries, acai and goji berries, along with an assortment of ingredients that includes purple sweet potatoes, rose hips, chia seeds, flax seed, spelt, oats and quinoa. While It’s The End of the Wort As We Know It is nutrient-rich, Sam is sure to clarify, “We’re not making any health claims in association with this beer. We are merely sharing our brewing process and the culinary ingredients we chose for the recipe that are rich in alluring aromas and flavors.” Slightly tart and subtly sweet with jammy blueberry, cranberry and cherry flavors, this medium-bodied beer clocks in at 9% ABV and is a critical addition to your survival bunker … at least we think so, anyway! 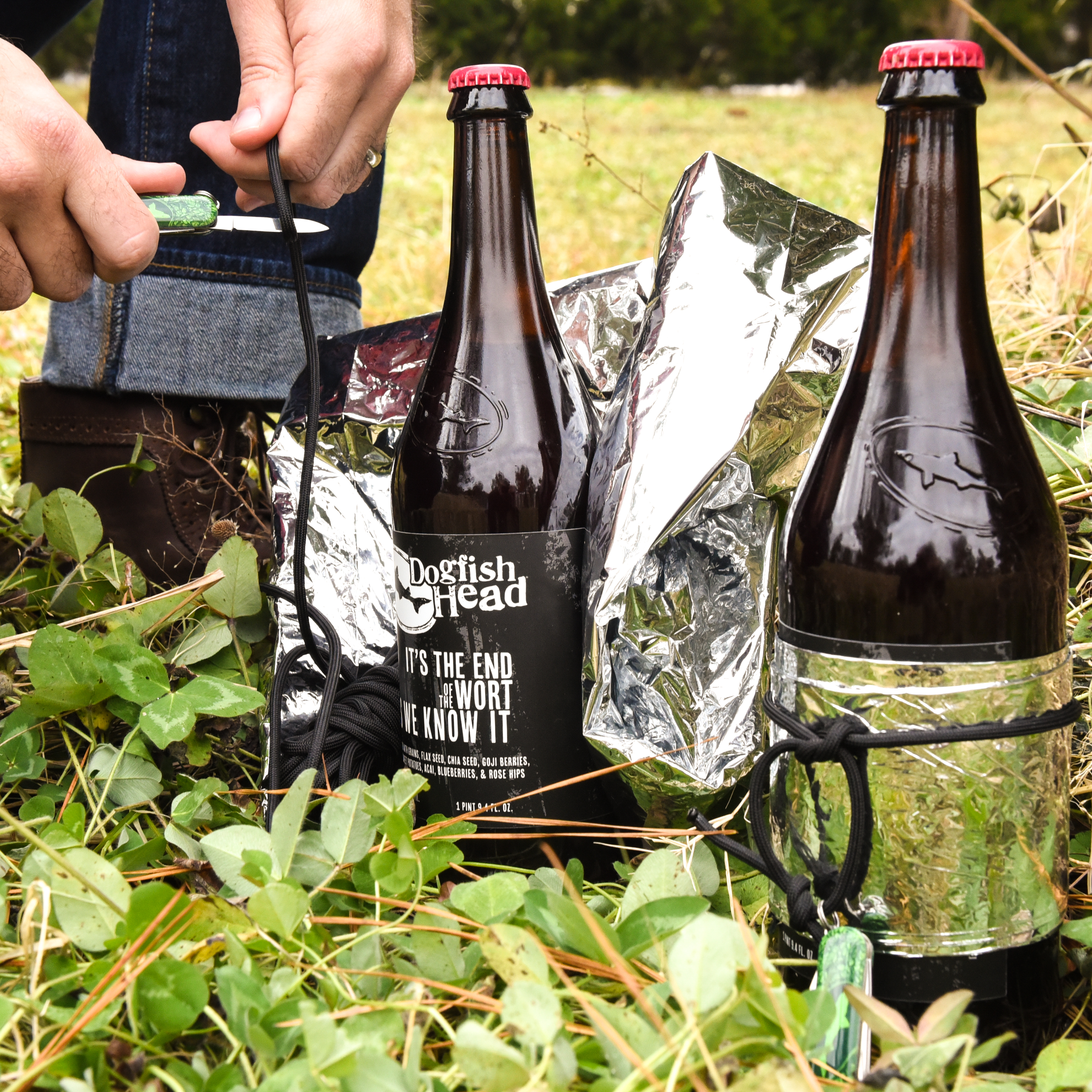 This 'first of its kind' beer will be released on January 27 at 11 a.m. as an ultra-limited (and super special) bottle release at our Milton brewery. A true survivalist kit, It’s The End of the Wort As We Know It is hand-packaged in a 750ml bottle and includes all the necessities to ‘potentially’ outlast the apocalypse (beer included, obviously). You’ll find a limited-edition Dogfish branded Swiss army knife tied to the neck of the bottle which will aid in opening your beer bottle or whittling a fishing spear to capture a conch for dinner. The bottle itself comes snuggly wrapped in a big ‘ol solar blanket you can use to protect your beer ... er, body from changes in the weather. And lastly, you’ll find a length of paracord securing the blanket to the bottle which just might come in handy if you need to make a tourniquet, or if you accidently drop your survival beer in quicksand and need to quickly jump in to heroically retrieve it. Safety first, beer recovering second (or maybe it’s the other way around).

Priced at $45, only 200 packages of the once in a lifetime It’s The End of the Wort As We Know It kits will be available for purchase, so be sure to get yours*! It will also be on tap at our Milton brewery while supplies last ... only two sixtels, so hurry!

*Only two packages per person, folks!