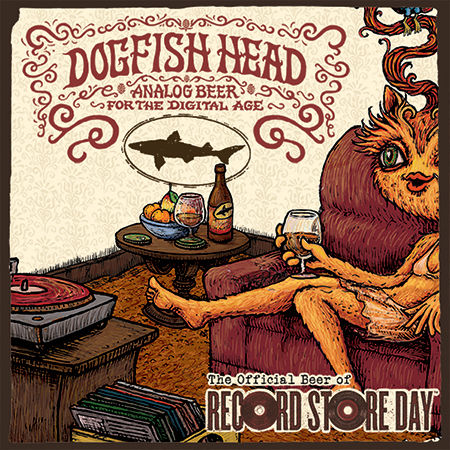 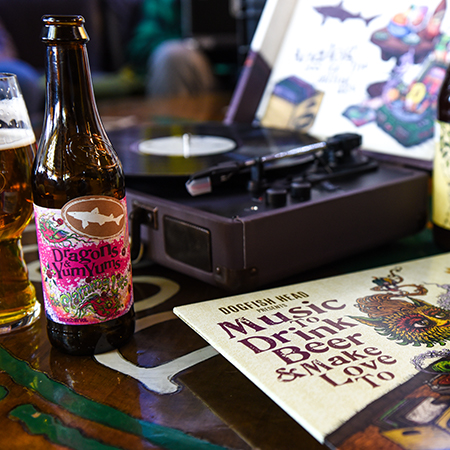 Record Store Day
Conceived in 2007 at a gathering of independent record store owners, Record Store Day both celebrates and helps spread the word about the unique culture surrounding nearly 1,400 independently owned record stores across the US, and thousands of similar stores internationally. With a shared commitment to that independent spirit, as well as a passion for all-things music, it only made sense for Dogfish Head to become the Official Beer of Record Store Day!

The Flaming Lips
As longtime supporters of all-things innovative, uncensored and artistically independent, we've partnered with The Flaming Lips to create a first-of-its-kind beer and vinyl collaboration that commemorates and celebrates Record Store Day. Through a series of ping-pong like text-threads, Sam and front man Wayne Coyne exchanged recipe and ingredient ideas for a collaboration with the ultimate goal of making it the most intense, 5-sense enveloping collaboration that's ever been brought to life for foodies, and music and beer lovers coast-to-coast. The result was a lip-smackingly tart pale ale brewed with dragonfruit, yumberry, passionfruit, pear juice and black carrot juice, and two songs that will transport you to another world.

Marq Spusta
A champion of all-things collaborative and artful, we’ve partnered with our old pal - and highly acclaimed artist - Marq Spusta to create custom pieces of art for both Record Store Day and Dragons & YumYums. Both pieces bring the unique stories to life through stunning visuals you’re sure to get lost in.

Sony Legacy Recordings
Curated by longtime friends Sam Calagione and Adam Block of Song Music's Legacy Recordings, 'Music to Drink Beer and Make Love To' features a legendary lineup of off-centered musicians. Sam, who's in the beer business and a raging music geek, and Adam, who's in the music business and a raging beer geek, sat down over a few beers and a stash of well-worn vinyl and picked some of their favorite tracks. The compilation will be released on Record Store Day at retailers across the country.