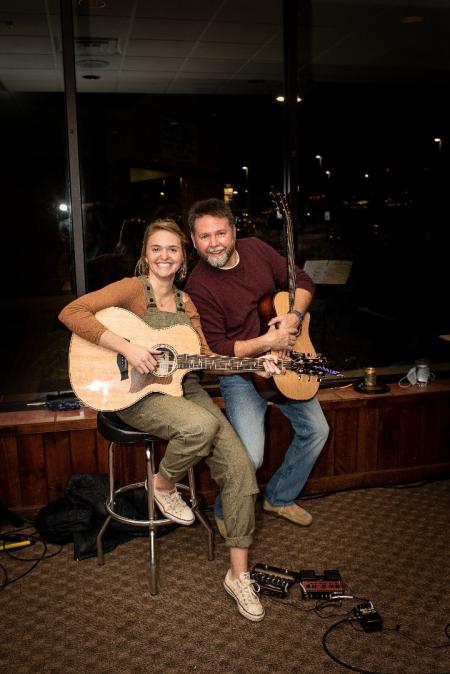 A bond formed in 1994, Roy and Madie Voshell have been living through music since Madie, the daughter of the duo, was born. Roy, a lifelong musician, began his career as a trumpeter for James Madison University’s marching band. From humble beginnings in Dover Delaware, he began traveling with multiple elite musical groups. After meeting his wife, both employed at Disney World, Roy furthered his passion for music and performing with multiple bands traveling across the west and basing out of Las Vegas. Most recently known for his part in Giant Steps, a local Delaware band, Roy continues to appreciate the ability to share his talents with friends, family and strangers alike.

With a similar trumpet background, Madie began with trumpet and piano as she grew through middle school and high school education. It wasn’t until college that she realized her real passion was in acoustic guitar and vocals. The duo has performed all over Delmarva and are always anxious for another chance to share their love of performing for others and collaborating together. Their music ranges from styles of Chris Stapleton, Avett Brothers, Fleetwood Mac, and many more. From old rock to bluegrassy tunes, Roy and Madeline bring a warm, fun, easy listening father-daughter duet to each performance.