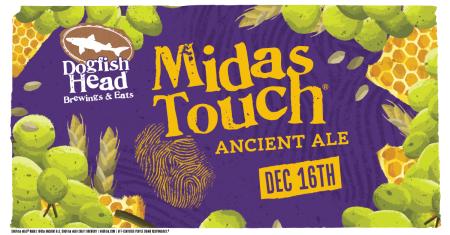 It’s BACK! Making its much anticipated return, Midas Touch was one of Dogfish Head’s first Ancient Ales and now, it’s back for a limited time only! Somewhere between beer, wine and mead, Midas Touch (9% ABV) is made with ingredients found in 2,700-year-old drinking vessels from the tomb of King Midas, including barley, honey, white muscat grapes and saffron.

Releasing Friday, Dec. 16, stop by Dogfish Head’s Off-Centered EmPOURium in Rehoboth and grab it in 4pk/16oz cans. Priced at $22 per 4pk. Available while supplies last!