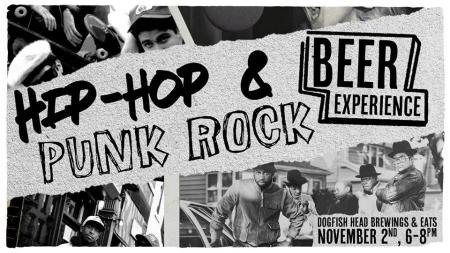 Join us on Friday, November 2 from 6-8 p.m. for the next installment in our Beer Experience series! This month’s menu takes inspiration from the punk rock and hip hop legends that adorn the walls in Dogfish Head Brewings & Eats.

Upon opening the new brewpub building in May 2017, Dogfish Head founder and CEO Sam Calagione curated a collection of artwork that celebrates the rebellious DNA of three American art forms: punk rock, hip hop and craft brewing. Sam collected lyrics and vintage photos from some of the seminal artists in the 80’s east coast punk and hip hop scenes that best embodied this rebellious ethos and who had tremendous influence on their craft. In the same way Dogfish mixes and matches ingredients to brew truly unique beers, Sam mixed and matched this art by hand-lettering lyrics from one genre-defining hip hop act over the photos of an influential punk musician(s) and vice versa. Like our beers, all of these artists rebelled against the status quo to create differentiated and unique work - music that set the groundwork for all that would come after.

For just $48* (per person), you’ll enjoy four courses, four complementary brews AND a crowler to go of our newest brewpub exclusive. Click HERE to grab your tickets, but hurry, folks ... they're going fast!

Check out the menu that’s inspired by the artwork:

Paired with a Double IPA (So exclusive, we haven’t even named it yet!) – This brewpub exclusive Double IPA is brewed with Golden Promise malt and a robust English barley variety. Hopped aggressively with a blend of mosaic and citrus hops, this beer has a nutty malt flavor to balance out the deep citrus and wild berry notes from the hops. In the words of Brewing Ambassador Bryan Selders,  “This is a big ass Double IPA.”
*This brewpub exclusive will go on tap the week after the beer experience… so you’ll be the first to taste it!

Our Inspiration: Run-DMC
Run–DMC was an American hip hop group from Queens, New York, founded in 1981 by Joseph Simmons, Darryl McDaniels, and Jason Mizell. The group is widely acknowledged as one of the most influential acts in the history of hip hop culture and was among the first to highlight the importance of the MC and DJ relationship – a (w)RAPPED DUO of harmonious proportions.

Paired with Viniferous IPA – This beer is brewed with pils malt, malted wheat, flaked oats and fermented Riesling & Viognier grape must, fusing the hoppiness of an IPA with the fruity complexity of a dry white wine. Viniferous IPA is available on draft at our Dogfish Head properties and ONLY available in bottles in our 2018 IPA’s for the Holiday’s 12-packs!

Our Inspiration: Eric B and Rakim
Eric B. & Rakim are a hip hop duo from Long Island, New York, com­posed of Eric B. (born Eric Barrier) and MC Rakim (born William Michael Griffin Jr.). They are ranked as No. 5 on About.com’s list of “10 Greatest Hip-Hop Duos of All Time.”

Paired with Central Digits – A brewpub exclusive India Pale Lager, this beer is made with Munich and Vienna malts and hopped aggressively in the whirlpool with Citra and HBC431, and then dry hopped again with these two intense, citrusy hops. This is a juicy, toasty brew with flaked oats in the grain and notes of tangerine and apricot.

Our Inspiration: Blondie
Blondie is an American rock band founded by singer Debbie Harry and guitarist Chris Stein. The band was a pioneer in the early American new wave and punk scenes of the mid-late 1970s.The band achieved several hit singles and became noted for its eclectic mix of musical styles incorporating elements of disco, pop, reggae, and early rap music.

*Bonus – Included in your ticket price is a crowler of the Double IPA that’s so exclusive we haven’t even named it yet. You’re the first to try AND the first to take home!