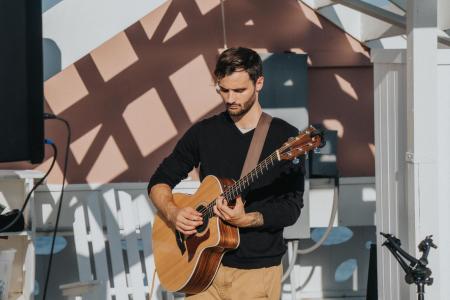 Devin Canfield is a musician, songwriter, and producer based out of Rehoboth Beach, Delaware. Music has always been the vessel that has allowed Devin to explore the creative curiosity art and creation. Devin can be found leading indie rock band Crosstown Walkers - a project that sonically aims to blend the dynamic range of shoegaze punk rock with a progressive blend of singer-songwriter acoustics vibes and ambient tonality. Alongside Crosstown Walkers he works in collaboration with brother Dylan Canfield in the alternative rock project DD Canfield. To conclude, Devin contributes lead guitarist and co-produces the ambient acoustic group Ethereal Vibrations - a project led and created by Chestertown, Maryland Singer-Songwriter Peter Sanchez.

In June of 1993 Devin was born in Northern New Jersey. After constant exposure to music through his parents and seeing his uncle's play guitar by age 11 he became aware of a magnetizing and hypnotic pull to play the guitar himself. From there, Devin began learning Blink-182 songs, other early 2000's pop-punk rock riffs and Metallica riffs. It is here his personal journey begins. Yet, the origin starts before age 11. From the day Devin was born his family honored music as a rite of passage to the human condition. He learned to pay respect to music and to honor the divine qualities that it offered. But, there was another essential lesson to learn. He was taught to acknowledge lyrics as a gateway to healing and truth. Music was the bible and the lyrics were the text. Music was a necessary source of life and its impact created  genetic markers in him to compose music and art.

Music is liberation and brining people together in sharing the higher power of music to as many people as possible is Devin's ultimate goal. He specializes in acoustic/electric guitar and songwriting. In his later 20's he began to explore the world of production and audio engineering. Over the years many DIY projects have been recorded and produced. When it comes to music, media, art, and the creative endeavors, Devin strongly believes in the the divine nature of it all and he aims to share that idea with others in hopes that it offers liberation and peace the same way that it did to him.