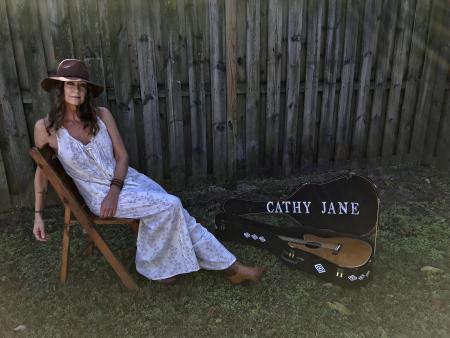 Cathy Jane, an acoustic folk singer-songwriter living in coastal Delaware, blends a love of American folk and early country with soothing vocals, raw guitar and percussion using a suitcase kick drum. Growing up in rural southwestern Pennsylvania (in a place called Scrubgrass Hollow) listening to her parents band playing country, folk and gospel music, she naturally gravitated towards this style, while teaching herself to play guitar. Upon venturing out on her own as a solo artist at age 58, she set a goal to record an EP before she turned 60. On September 2, 2018, Cathy Jane debuted her EP titled 'Back Home,' just three weeks before her birthday. Her voice has been described as "a sweet pure feminine voice with the slightest folksy twang." Cathy Jane's music has been influenced by artists such as Gillian Welch, Emmylou Harris, Kate Wolf, Eilen Jewell, Bob Dylan and John Prine. Stop by on Saturday, November 23 from 6-9 p.m. and give her a listen!