In our continuing effort to scale regenerative farming practices, we’ve partnered with our friends at Patagonia Provisions to launch Kernza® Pils, a distinctively crisp and refreshing German-style pilsner beer made with Kernza, a remarkable perennial grain that helps draw down carbon from the atmosphere and sequester it in the ground. Hitting shelves and taps now in select markets coast to coast, Kernza Pils is the most widely-distributed Kernza-based beer on the market and marks a significant shift towards a more climate-friendly brewing industry.

In 2008, The Land Institute in Salina, Kansas made a breakthrough in regenerative agriculture with the development of a perennial grain called Kernza. Whereas most grains are planted and harvested annually, Kernza stays in the ground year after year, developing roots up to 12 feet long.

Perennial crops like Kernza are beneficial to the environment; they protect soil from erosion and improve soil structure. They increase ecosystem nutrient retention, carbon sequestration, and can contribute to climate change adaptation and mitigation. And in the case of Kernza, they lend a uniquely nutty flavor that makes a delicious beer. The Patagonia Provisions and Dogfish Head collaborative launch of Kernza Pils marks an important milestone in scaling Kernza. 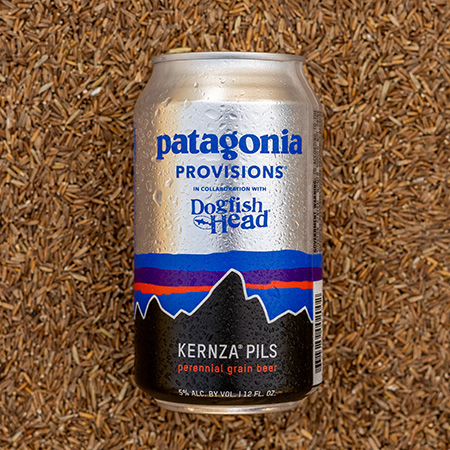 “We create each of our products with a solutions-based mindset, discovering and incorporating ingredients that help to solve the environmental crisis,” says Birgit Cameron, co-founder and head of Patagonia Provisions. “Together with Dogfish Head, we’re able to spotlight the important and pioneering work of The Land Institute. By creating market pull for a regenerative crop like Kernza perennial grain, we hope to incentivize farmers and brewers to shift in this direction and to further our commitment to being in business to save our home planet.”

Kernza Pils is an earthy, aromatic and notably refreshing pilsner brewed with organic malted barley, organic Contessa hops (a newly organic certified hop variety) and of course, Kernza perennial grain. The melodic interplay of the Kernza and Contessa hops provide the beer with its distinct flavor profile; the Kernza adds a subtle, spicy warmth to the beer, while the organic Contessa hops, with notes of pear and green tea, give it a bright, floral character and uniquely crisp, clean drinkability. 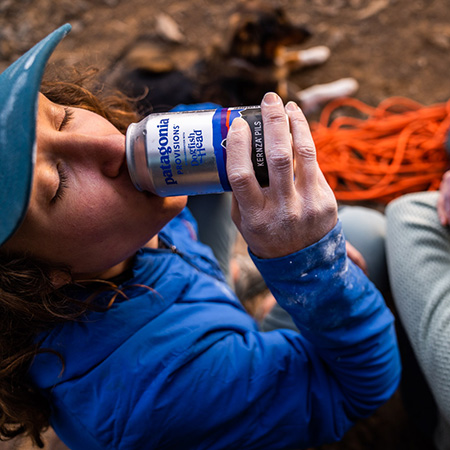 “Dogfish Head first brewed a beer with organic ingredients in 1995, when we used an organic Mexican coffee to create our Chicory Stout,” says Dogfish Head founder & brewer Sam Calagione. “Since then, we have brewed countless beers with organic and regenerative ingredients and have partnered with numerous organizations committed to addressing climate change and other environmental issues, like The Nature Conservancy to whom we have donated more than $1M collectively since 2007. While Dogfish Head has always been focused on introducing high-quality culinary ingredients into the brewing process in creative ways, this partnership with Patagonia Provisions allows us to go wide and deep on a delicious beer that shines a spotlight on Kernza, a hardworking grain that not only TASTES good but DOES good.”

“Diverse perennial grain agriculture holds great promise to reverse and regenerate the degradation of the soils, resources and species upon which human life depends,” said Rachel Stroer, President of The Land Institute. But the true power of perennial grains will only be realized when grown on the landscape at scale. Partners like Patagonia Provisions and Dogfish Head are leading the movement to get perennial crops, like Kernza, on more acres across the country. When it comes to perennials, more is better.”